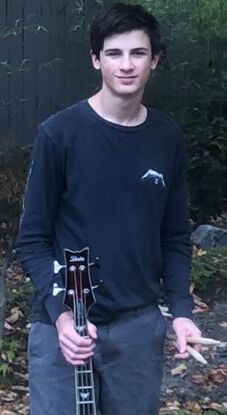 Evan is a drummer and bassist in the 11th grade from Colorado. He has been playing drums since 4th grade, and started playing in order to join his friends band. He chose the drums because it is the glue that holds the band together but there is still lots of room for creativity. He took a break from playing drums, and picked up bass in late 2019, because he loves the sound and musical role that bass plays. Bass is similar to drums because it is the backbone of any song, but it allows for more creativity, through different techniques and more sounds. His favorite song to play is YYZ.  His favorite bands are Tool, Megadeth, and Black Sabbath. Apart from music, he enjoys skiing and fishing.
​
Evan wants to contribute to the website because he thinks it is important to recognize the impact music has on our society.  Music has a large impact on him and he knows it has an extremely large impact on social and political change, but no one talks about it. Seeing the chance to help publicize the impact that music has had on society, he decided to join Message In Our Music. He has been a part of 3 bands, and led two of those bands in the past. He has performed for friends, family, and in restaurants.

Julia Grant is a junior at The Horace Mann School in the Bronx. When she was introduced to music at a very young age, she immediately fell in love. Over the years, her passion has expanded from just listening to music and singing to playing the piano and guitar, dancing, writing, and producing. For her, music acts as a way to express herself through something she loves. At Horace Mann, she has taken advantage of all the fantastic music courses they offer and recognized her love for producing. There is something special to her about creating music that she is proud of and can call her own. In addition to music technology, Julia is in the advanced choir, all of the musicals, is the co-captain of a hip-hop dance group, and has taken a music theory course. Because she enjoyed these courses so much, she took a music production technology course through New York University last summer.

While Julia has a great passion for music, she is also very interested in dissent and protest movements. From the Anti-Vietnam War movement to the Me Too and Black Lives Matter Movements, she enjoys looking at different protest movements and how social change is made. This year in school, she is even taking a history course called Voices of Protest.
​
Wanting to connect two things she’s incredibly passionate about, Julia became a Contributor on Message in Our Music. She says: “Many protest movements have used music to express dissent, and I am excited to explore different types of music, the messages they hold, and how they can ignite social change." 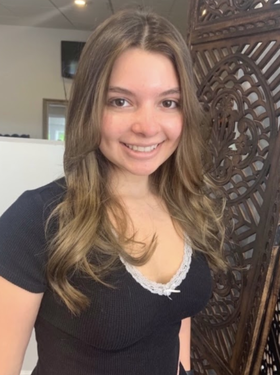 Ashley Weitz is a Junior at Columbia Grammar and Preparatory School in New York City. Her passions lie in entrepreneurship, politics, and social justice. She founded Girls Unite Everywhere to connect girls who can share their interests and educate each other on different areas of expertise globally. This education sparks a curiosity in new subject areas for some. Girls Unite Everywhere also gives girls the confidence to enter fields unbeknownst to them previously. Ashley has worked in other areas, including politics, criminal justice reform, teen mental health, and women's rights.

From a very young age, Ashley had a significant interest in music. She grew up in a very musically inclined family. Her father was always listening to 60s, 70s, and 80s music on the radio while her eldest sister, who is eight years older, also exposed her to different music genres very early on. Her sister controlled the radio on the way to school, so Ashley listened to everything from early 2000s pop to EDM. When her sisters enrolled in music classes, she did as well, taking piano and guitar lessons, and even trying out the drums for a bit. Even though she doesn't play instruments anymore, music remains a large part of her life. She continues to listen to the variety of music she was exposed to as a child and the different genres she discovers as her taste evolves.
​
As she became more aware of the world's injustices, Ashley noticed the deeper meaning behind the song lyrics that she grew up listening to in the car with her family. An example of this is “Imagine” by John Lennon. Although she didn't recognize it as a young child, Lennon wrote this piece during the Vietnam War, and in short, he asks listeners to imagine a world at peace. Ashley understands the power of music and the effect it can have on its listeners. She is very interested in lyric analysis to determine how songs, such as “Imagine,” affect the listeners of its time and today. Even more, she hopes to use music to push forward the current efforts in women's rights, mental health, criminal justice reform, and politics.

Email contributors@messageinourmusic.com if you want to contribute to the site!